ONE DARK LIE
BY CLARE CHASE

The truth can hurt, and sometimes it leads to murder …
After becoming embroiled in a murder investigation, Nate Bastable and Ruby Fawcett have decided to opt for the quiet life. But crime has a habit of following them around.When her work dries up, Ruby finds herself accepting a job researching and writing about Diana Patrick-John, a colourful and enigmatic Cambridge academic. Simple enough. But then there’s the small fact that Diana was found dead in suspicious circumstances in her home – the very place where Ruby has now been invited to stay.As she begins to uncover Diana’s secret life, Ruby’s sleuthing instinct kicks in, leaving her open to danger and retribution. But can she rely on Nate to support her? Especially when his behaviour has become increasingly distant and strange, almost as though he had something to hide …
BUY LINKS
Amazon
Apple iBooks
Kobo Books
Google Play Books
NOOK Book

Clare Chase writes mysteries set in London and Cambridge featuring crime-solving couples. She fell in love with the capital as a student, living in the rather cushy surroundings of Hampstead in what was then a campus college of London University. (It’s currently being turned into posh flats …)
After graduating in English Literature, she moved to Cambridge and has lived there ever since. She’s fascinated by the city’s contrasts and contradictions, which feed into her writing. She’s worked in diverse settings – from the 800-year-old University to one of the local prisons – and lived everywhere from the house of Lord to a slug-infested flat. The terrace she now occupies presents a good happy medium.
As well as writing, Clare loves family time, art and architecture, cooking, and of course, reading other people’s books.
She lives with her husband and teenage children, and currently works at the Royal Society of Chemistry.
One Dark Lie is her third novel with Choc Lit. Previous titles are You Think You Know Me and A Stranger’s House.
Facebook: www.facebook.com/ClareChaseAuthor
Twitter: www.twitter.com/ClareChase_
Goodreads Author Page: https://www.goodreads.com/author/show/10204574.Clare_Chase?from_search=true
Blog: https://clarechase.com/blog/
Website: www.clarechase.com

GIVEAWAY!
A fantastic prize going to one winner!!! 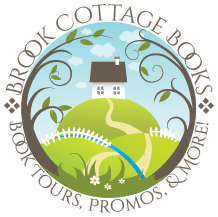 A BED OF BRAMBLES BY SAM RUSSELL

A BED OF BRAMBLES
BY SAM RUSSELL

Genre: Contemporary Romance
Series: Draymere Hall #2
Release Date: 11th March 2017
Hettie and Alexander are back, and this was never going to be a conventional love story. No bed of roses. Proud, passionate and wilful, they are alike in so many ways. That has to be a good thing doesn’t it? Or it could be a disaster…both carry scars, and old wounds have a habit of causing new hurt.
Physical attraction draws them together but hearts and minds can be thorny. One thing is certain, together or apart their lives will move on. Alexander and Hettie’s clashes of spirit will only be part of the story.
Second chances. New beginnings. The opportunity to make things right. Or to make the same mistakes all over again. Unless fate takes the future out of your hands…

Praise for Sam Russell
‘Russell delves into her characters’ minds exposing their innermost thoughts, fears, and desires’
‘The author's ability to flesh out a character into a believable human being is what sets a great book above the rest’
‘Sam Russell's beautiful writing draws you right into Draymere alongside Hettie, Alexander the horses and dogs, and keeps you there’

EXCERPT
Her sharp green eyes slipped over him as she scanned the arrivals hall. He noticed the dusting of sun-freckles across her cheeks and his heart clenched as he waited. He needed to read her face, to believe she was back for good. Her gaze swept around again, and this time their eyes connected. For a suspended moment it felt as if his heart stopped beating, and the pit of his stomach fell.
Then she grinned at him.
The suitcase swung into her legs at her sudden change of direction. He waved, and she abandoned the case and ran at him. He lifted her off the ground and pressed his eyes shut, not trusting himself to speak. He felt her breath warm on his neck. 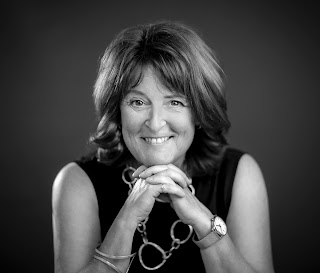 Sam Russell was born in London, but it was her family’s move to the countryside which ignited her passion for writing and love of the rural life. She worked as a groom and trained as a riding instructor, teaching in the UK and abroad before returning home and marrying a farmer.
Sam ran a livery stables from the farm whilst raising their three children. Her writing, which was a hobby while the children were young, took off when they flew the nest. She was encouraged to write and publish her debut novel, A Bed of Barley Straw.  Her latest book, A Bed of Brambles, is the second novel in the Draymere Hall Series.
When she’s not writing, Sam will be out and about on the farm with the animals and the dogs. You can read more of her story on her Rustic Romance blog.
Facebook: https://www.facebook.com/SamRussellAuthor/
Twitter: https://twitter.com/SamRussellBooks
Goodreads Author Page: https://www.goodreads.com/author/show/13571859.Sam_Russell
Blog: https://russellromance.com/blog/
Website: https://russellromance.com/about/ 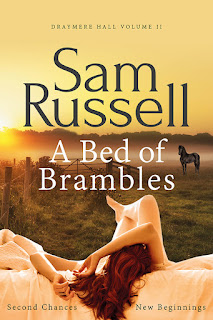 Posted by ReadAlongWithSue at 20.3.17 No comments:

Cat Hope doesn’t want to go to prison. She needs a job, and she needs it fast: judge’s orders. Caught in a drugs raid while trying to dull the pain of her parents’ deathaversary, Cat is serving a ‘rehab’ sentence under a new identity in the deepest depths of rural nowhere.
Kay Mahon, office worker by day and hacker by night, is on the run from a past life that he’d rather not remember.
When their paths cross, they discover that the night that derailed Cat’s future nineteen long years ago also changed the path of Kay’s life. Confused and intrigued, they begin to investigate the truth behind the deaths of the successful rock star couple Jackie and Adam Hope. Little do they know that their quest is putting Cat in grave danger.
After Cat goes missing, Kay finally puts the pieces together. But how is he going to find Cat and her abductor in a place as big as London before it is too late?

N.I. Wells writes mind-bending thrillers and psychological dramas featuring feisty heroes and extraordinary villains. DEAD HOPE is the first published novel in her “Wake Up Dead” themed thriller series, with the next two books scheduled for release through the course of 2017 and 2018.

Writing under the alternative pen name of Nicky Wells, N.I. Wells has previously published seven works of romantic fiction with US publishing house, Sapphire Star Publishing, as well as independently.

Born in Germany, N.I. Wells moved to the United Kingdom in 1993 and currently lives in Lincoln with her husband and their two boys. She loves listening to rock music, dancing, and eating lobsters. When she’s not writing, she’s hopelessly addicted to reading crime novels by the truck load. 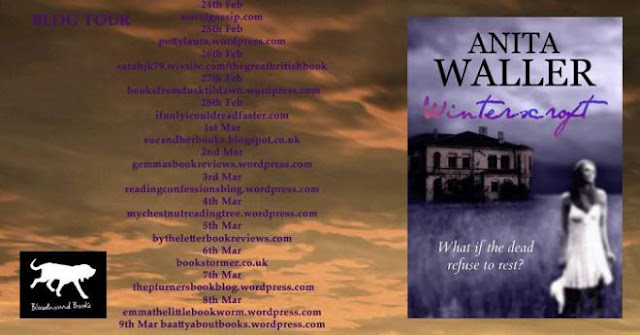 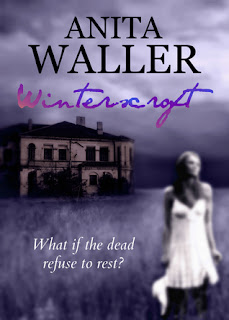 Having never read any of this authors books before and having an opportunity to do so now, I was eager to start this.The author starts the story off with quite a heart rendering punch. An accident. This affects this Christian family enormously as you can imagine. With a fatality of the daughter Lavender.Read that name and I dare you to not get a whiff of the heady scent of Lavender in your subconscious mind. I know I did.Things seem to be plodding on until (not going to name names as don't want to spoil it) there is planning for a wedding. The wedding is taking place but it's Lavenders fiancé who is now getting married.Things start to heat up with the creepiness of this story that will either blow your mind or make you run and hide under the duvet.Very well written. Very atmospheric.Thank you to Bloodhound books for my gifted copy

When the beautiful Lavender is killed in a tragic car accident her family and fiancee Matt are left devastated. As the year’s pass and wounds begin to heal Matt, who has remained close to Lavenders family, meets Beth and falls in love again. When the happy couple announce their engagement it sparks a series of bizarre and disturbing events. Then when Matt and Beth make plans to wed at Lavenders family home, Winterscroft, the frightening truth becomes apparent. Lavender is back. And she is not happy. From the bestselling author of 34 Days comes a tale of love, death and revenge. 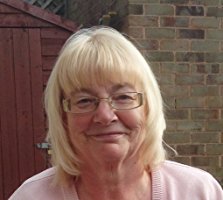 Anita was born in Sheffield, South Yorkshire and has lived all her life there. She has three adult children and seven grandchildren ranging in age from 9 months to 21 years. Anita and Dave have been married almost 49 years!
She wrote Beautiful in 1985 and had it accepted for publication. They were the contract stage when the publishing house went into liquidation.
Like many another book it ended up in the loft until two years ago when she resurrected it, retyped all 100,000 words (it was orginally written on an Amstrad 8256 and all she had was a hard copy!) and sent it off to Bloodhound Books.
She is now retired from my life of being a Patchwork Tutor and HGV driver’s wife and concentrates on patchwork for the pleasure of it and writing. She started writing at around the age of 8 – she clearly remembers writing ‘novels’ at that age which were actually short stories split into chapters!
Anita’s genre is murder – but murder with a good reason behind it!
Winterscroft is out now and available from Amazon UK and Amazon US.
Posted by ReadAlongWithSue at 1.3.17 No comments: 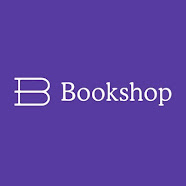